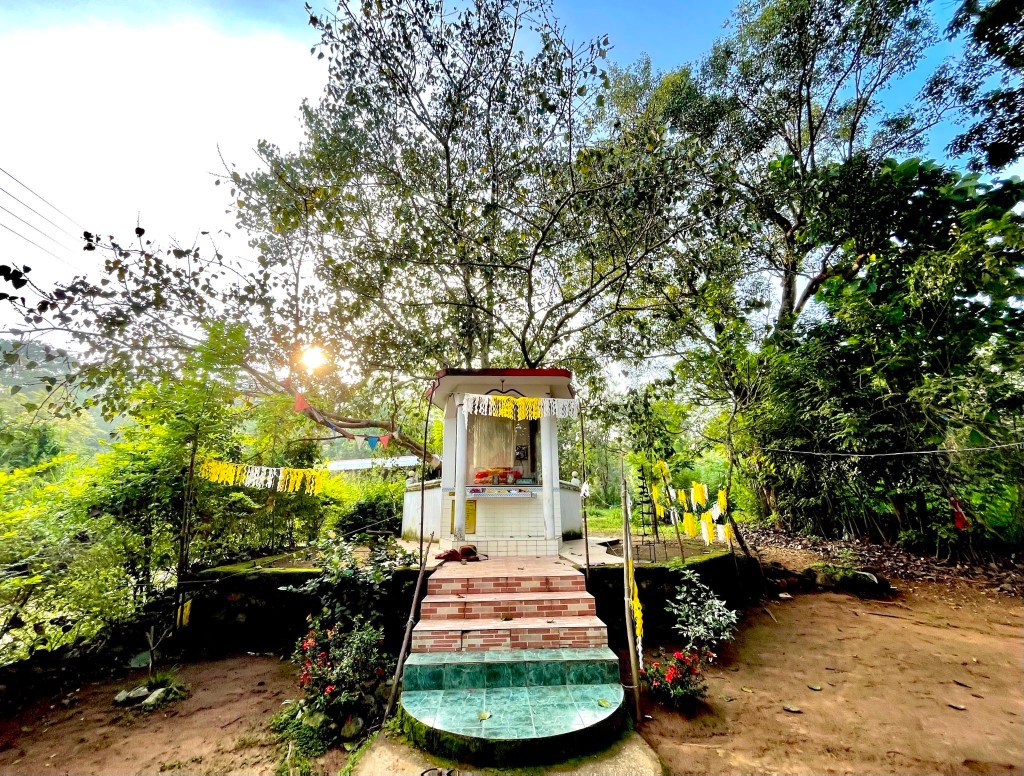 In a message to our community, Bhante describes receiving dana on a poya day in Sri Lanka:

In Sri Lanka, poya days are a nationwide, civic holiday.

Every quarter of the lunar cycle, Sri Lankans take special care and devotion to the Buddha, the Dhamma and the Sangha.

The day where monks gather to recite the pātimokkha. Once every full moon and new moon.

The uposatha is done early morning here, so, there was little time for me to go on alms. I thought I would go on a short one, and be back to eat before we renew our sīla.

After reaching the bodhi tree, which stands at the heart of this small village where I go for alms, I see a couple, dressed in immaculate white clothes, sweeping the dhakkhinaya path (circumambulating path) around the tree, cleaning and caring for their village’s shrine and offering Buddha pūjā (food for the Buddha rūpā).

I am then reminded that uposatha day for us monks also means poya day for all of this nation.

I never saw this couple before, even after a month of going on alms here. They are somewhat surprised to see a monk on pindapāta in their neighbourhood. But quickly, since they were not prepared to see me, the Buddha pūjā becomes sangha pūjā and gets offered into my bowl.

Thanking them with some pāli stanzas, while putting these words into practice, here and now, for myself:

(With Boundless Love for this entire universe,
One develops a boundless heart.
Above, below and all around,
Unrestricted, rid of anger and resentment.)

I move over to the next house.

As nobody is coming, and that couple sees this, the lady walks straight into the house and announces my presence:

Every time a monk waits by a house here, and people walking by see that those in the house haven’t noticed, they usually run inside to tell them that a monk is there, waiting for alms.

Or until the universal signal that a monk has been seen, is heard from inside the house or somewhere in the yard:

Then I continue towards a street whose people asked me to come every day.
I already have more than enough in my bowl. But it feels like I would be disrespectful not to go, especially on poya day.

As usual, these two little boys come out with their grandmother and offer. The eldest looks at me with much gladness and, with eager eyes.

He is waiting to see if he will be able to help me today.

He knows that I can’t speak Sinhalese very well so he simply watches me, to see if I will keep going further down the road, to the house of his relatives down the street.

As soon as he sees that I turn out of their driveway towards the further end of the road, he starts running in his backyard and jumps out ahead of me.

He has been doing this since the first day.

He walks a little while ahead, in a very solemn and enthusiastic manner, turning around a few times to make sure I am following and then, as we get closer, he shoots for the house and runs straight inside to announce my arrival.

The message is also immediately shouted to the neighbouring house.

This family has been delighted to have a monk coming on their not-so-obvious backstreet, they gladly asked me to come every day. Even though, there is no door on their half-finished brick house, and metal roofing sheets serve as windows, until they eventually get some.

Still, they come out, beaming, smiling, baby in arms and surrounded by the whole young family.

They sat me down on a chair yesterday as soon as they noticed I was bleeding and literally walking in my own blood from having a couple of leeches on my forest walk. The whole family cleaned and bandaged up my toe.

But now, my bowl is full to the brim, which is the limit of what monks can accept, in their bowl. To accept more, beyond the bowl’s edge, is infringing one of our sekhiyas, a training rule.

But I have not walked back yet.

I know at least four more houses want to give. As they have asked me to come to their place.

My alms route has gotten longer and longer these days.

As people notice the monk going for alms, if I did not come to their house directly, many have come and ask to come by their place and point with their finger in that direction.

As I have always had a hard time saying “no” to people, if it might disappoint them, I have gotten myself in a very long alms route now. 🙂

Now people are simply trying to fit a couple of spoonfuls of their rice in the bowl and push it down and shove it to the sides, all around.

It gets  to the point where I try to explain, “I cannot accept more in the bowl”

But they don’t understand.

So, I simply open the lid and show them:
can’t fit one more grain of rice in there!

They instantly seem happier than ever and smile, full teeth out.
A smile that slides down in their heart,

which shows in their eyes.

The witnessing of generosity towards Dhamma is particularly delightful.

They just put the rest in my bag, which is also getting its fair amount of attention.

Just before crossing the street back to the monastery trail, this man which came to me yesterday, at the same spot, and asked me to come to his place, made sure I would not forget!

I start walking in the direction of his house and every driveway, now, someone is standing, with food in their hands, waiting for me to come.

At this point, I will never be able to eat before uposatha, so might as well allow them to make merits. 🙂

This man speaks little english, and at his house, he and his family offer, food and a bag of freshly picked flowers, which he seems particularly concerned to offer.

He then says, with a hopeful voice, “Bhante, come! come! my friends!” And he motions me further down the road where many people are waiting.

Then, he points further down and says, “my friends, my friends!” 🙂

I wonder, how many friends does this person have?

My poor bag, which I sowed by hand, is bursting at the seams, literally. Again and again, I shyly open the bowl to show it is utterly full.

Beaming smiles are given.

They see I am being dragged around, much further than I need, and I now accept, only out of compassion, since I had enough a long time ago.

They are even more delighted by the fact. 🙂

Because now I wonder if I am not simply going to miss the thing altogether!

The gentleman reformulates his previous request for me to come, every day to his house. At this point, I have to explain to him that I am only allowed to go to the small village. And I have too many houses to go to now.

I cannot go to his place every day.
The news is putting his hopes down, quite clearly.

He says “then I carry your bag to the monastery!”

So we walk back, this lady, from the opposite side of the road, who also asked me to come, sees that I was not going to, so she came to me. With her family’s food to offer. The bag is also full now and the gentleman carries it to the uposatha hall.

As I start sweeping the hall, and wonder what to do with the flowers.

After uposatha, I go to the dāna salla to eat and offer most of the food to the sangha. I then put the rest of the flowers on each monk’s table in the hall. There are flowers now, for each of them. Waiting for them to arrive.

And of course, to the Buddha rūpa.

Because, as the Buddha said, the pātimokkha and the vinaya, which are recited every uposatha, are the string which tie the garland of flowers, his Dhamma teachings (suttas), from blowing away in the wind.